It’s been almost 2 1/2 years since we got our dogs.  Hard to believe it’s been that long already.

No it isn’t, who am I kidding.

The dogs have taught me a lot and I’m very happy that we have them.

Skye has taught me that it doesn’t matter what time I go to bed, she will be whimpering by my bedroom door every morning at 7:30am, like clockwork.  Blu has taught me that when he paces in the house, he needs to go out and poop.  I’ve learned that they understand a lot more than I originally thought they would, so I am careful with the words ‘park, outside, play, treat, carrot, bye-bye, eat, ball.’  Those ears perk right up with these keywords, and I better not disappoint them and not follow through.  It can cost me a variety of things including chewed bathtub drain covers, blankets and bras.

They know when I’m happy or sad, and they do tend to adjust their behavior based on how I’m feeling.  If I’m in a bad mood, they find a comfy location and take a nap.  If I’m in a good mood, they are staring at me wondering when they will get to go out and play.

When we let them out in the backyard, we always worry that they will return to their old ways and start ripping up sprinklers, eating bushes and tinkling in the grass.  If left alone long enough, they probably would.  For the most part, they are pretty good and have fun, and only occasionally dig a little and rip WHOLE branches off the bushes.  Skye sticks her front paws in our pool and gets drinks.  Blu avoids it like the plague.

When we first got two dogs, it wasn’t easy.  It’s still a little extra work, because walking two 80 pound dogs isn’t as much fun as walking one.  They need to run and get their energy out first, and then they’ll walk.  I solve the problem by putting them in the car and driving them to the dog park where they can romp and play and I can walk peacefully around the park.  It’s a win-win.

In many ways I’m happy that we have two, since they do entertain each other and when I’m gone all day, they have companionship.  I can also take them out individually if I want, as long as the one staying home has someone with him/her.

I love my dogs and I look forward to spending a lot of great years with them. 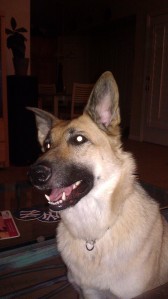 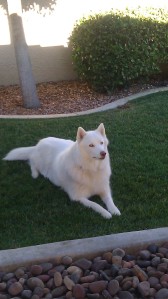 It’s been a year since I got my dogs, after over 20 years being pet-less. Well, except for the bird and the fish. The bird flew away and the fish don’t play with me, so I don’t think they really count.

It took numerous discussions in our household to accomplish this major lifestyle change. NUMEROUS. Some heated.

Everyone had an opinion.

Mine was the only one that actually counted.

After finally agreeing to dogs, we had to pick dogs. I wanted a German Shepherd. Since the entire reason we were getting dogs was because I fought long and hard for them, I was going to get my Shepherd. Period.

“But I want a pretty dog” my husband said. What? Shepherds are gorgeous dogs! What is he talking about. “I want a Husky.” he added.

So I go online and read about my Shepherd (because we ARE getting the Shepherd no matter what he says) and about HIS Husky.

“You realize this dog will be difficult to manage.” I point out.

“Look at their colors, look at those eyes, they are beautiful.” That’s what he said.

So to make a long story short, after researching until I knew more about dogs than I did about my kids, we finally agreed to get BOTH.

I got lucky and found puppies for both breeds fairly close to us and we went and picked them out. They were five days apart in age. Perfect! They’ll be lifelong partners. They’ll play together and amuse each other. They’ll never be lonely. They’ll be so much fun!

Good idea? Not so much.

So in the beginning, there was poop and vomit and most of the time the poop was really diarrhea.

In the house of course.

Fortunately, it was mainly in their room. Yes, my dogs got their own room. It was empty because my daughter moved out, so why not? We setup their crates in there and left the room empty so they could play. And poop.

The poop was never intentional. We took them out and worked very hard to potty train them. It took about four months to get them to where they only occasionally did it in the house. By six months, we were almost poop-free.

Along the way we took them outside and let them pee and poop in the yard and we would occasionally leave them out there for a bit to play. In our beautiful yard with green grass, gorgeous shrubs and plants, and a pool.

It took them roughly two months to turn the grass brown.

They also ate the sprinkler heads, dug up the brown grass and attacked the bubblers around the shrubs, in addition to actually ripping chunks of leaves off the plants.

The bubblers were the most difficult part to figure out because we would have to wait until they came on to determine which ones were gone. Except for when the black plastic tubing was actually strewn out on the brown grass.

By the time they were six months old, the word “divorce” was used on a daily basis by my husband. Most of his other comments included the words “I hate dogs.” I learned to tune all of this out and keep working with the dogs to get them to behave better. I’ve been fairly successful, though I have slacked off a bit lately.

Oh, I haven’t shown you what they look like.

We’re still together and the dogs are still here.  I mean really, look at them.